Global Oil Supply and Demand at a Glance

Global oil demand is expected to rise 1.4 million b/d to 95 million b/d in 2016, driven in part by increasing demand for LPG, naphtha, jet fuel/kerosene and gasoline.  Global refinery capacity is due to reach 95.2 million b/d by the end of 2016, with the Far East accounting for 22% of the market share.  India is poised to bring over 500,000 b/d of additional refining capacity to the market before the end of this year.  In the West, Europe is forecast to shutdown 235,000 b/d of capacity in 2017, mainly due to weak refinery margins.  It is likely that access to proximate resources of feedstock, coupled with operating efficiencies offered by new refineries in the East, will add competitive pressure to European refineries, potentially stimulating more long-haul clean transportation demand.  Since 2014, crude oil intake at refineries has expanded by about 2.2 million b/d, with 75% of this growth occurring in the East.  Global oil supply is projected to rise 1.1% in 2016, reaching about 97.5 million b/d.

One of the main factors contributing to oil demand in the East is the build-up of China’s Strategic Petroleum Reserves (SPR).  Since the early part of 2015, China’s implied imports and actual imports started to decouple.  Based on our own calculations, between January 2015 and May 2016, China imported approximately 200 million barrels of crude oil in excess of what is required to balance the system.  Looking ahead to 2017, we expect China will require 6.8 million b/d of crude to balance the system (refinery intake less domestic production).   Our reference case estimates that China will import an additional 100 million barrels for its SPR by the end of 2017.   The additional demand generated for SPR build-up equates to 200,000 b/d between August 2016 and December 2017.  For the first half of 2016, China’s crude oil imports averaged 7.4 million b/d, suggesting a pending slowdown in demand. 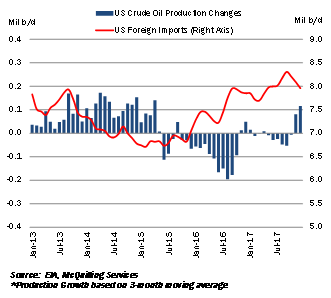 e last 18 months.  Data from the US Energy Information Administration shows the US crude oil production is down 761,000 b/d year-on-year, with Texas and North Dakota accounting for over 63% of the losses.  Crude production is expected to decline to 8.6 million b/d in 2016 and by a further 400,000 b/d in 2017. The losses in production will likely result in increased foreign imports for the Western nation.  According to our calculations, 2016 ton-mile demand on the AG>US Gulf regional trade is up 15.5% year-on-year.

The Organization of Petroleum Exporting Countries (OPEC) has averaged around 34 million b/d in crude oil production in the first half of 2016.  Saudi Arabia holds the position of top producer at around 10.3 million b/d, while Iraq has increased production to 4.5 million b/d in May 2016, taking the position as the second largest producer within the group.  Going forward, we expect additional growth from Iraq and Iran, offsetting declines in Venezuela.  Venezuela, which sits on some of the world’s largest oil reserves, is currently producing 2.1 million b/d, 500,000 b/d less than its 2015 average.  Meanwhile, Nigerian crude oil production has decreased by 447,000 b/d year-on-year, down to just 1.5 million b/d.  Export flows out of West Africa to the European continent have been impacted as Germany and Spain have seen a decrease of over 250,000 b/d in imports over the last 12 months.

Order a copy of McQuilling Services 2016 Mid-Year Tanker Market Update
This report provides an outlook for monthly spot market freight rates and TCE revenues for 18 major tanker trades on eight vessel segments for the second half of the year and the remaining four years of the forecast period.  All projections are based on market performance from the first half of the year