The past few days revealed some new and interesting data regarding possible developments for crude oil exports from the US.  In our previous discussion on the subject we highlighted the possibility of steady or even increased exports in 2021 based on an assessment on how the WTI price will move relative to Brent and the incentives this may create for more AG barrels to reach US refineries.  This week we are focusing on the short-term, exploring the possibility of US crude oil export coming off to significantly low levels in the following months.
By looking at historical data we found that there is strong correlation (r-sq. of almost 0.9) between the net US crude balance -defined as production, imports and inventory changes minus observed refinery demand- and US crude exports.  Next, we looked at the latest data from the Energy Information Administration (EIA) and JBC Energy regarding projected crude production and demand in the country.  What we found out was that with the pandemic measures subsiding, initial signs show crude demand in the US rising faster and higher than the expected crude production levels, thus increasing the crude balance deficit. As an example, for June 2020 we expect demand to settle at around 14.6 million b/d whereas production levels to remain around 10.6 million b/d. Fast forward one year to June 2021 and we see projected demand at more than 15.5 million b/d while supply remaining steady at around 10.4 million b/d (Figure 1).
Putting it all together, we expect the US refining complex to make up for the initial deficit by consuming more domestic barrels than previously expected, thus “dragging” US crude exports down to possibly less than 1 million b/d until the end of the year (Figure 1).  Despite that, we are projecting a strong recovery of exports in the beginning of 2021 given our previous projections of WTI price catching up with Brent, which will make it more valuable for exports at the same time as other heavy sour barrels from the AG or Europe become more attractive for intake.  The “wildcard” here is how much of a drawdown we will see from inventories that could potentially support exports.  By using historical data from the 2017-2018 period (the previous “shale war”), we determine this to be a little less than 100 million barrels of crude throughout the course of one year until December 2021. 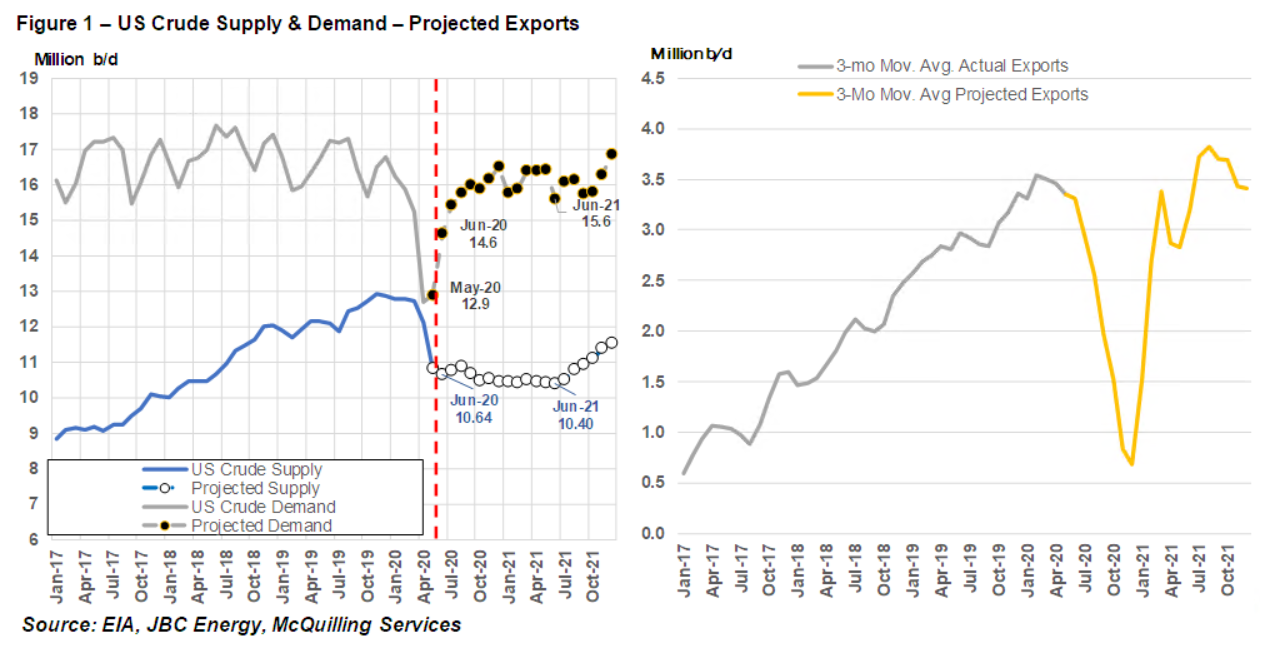