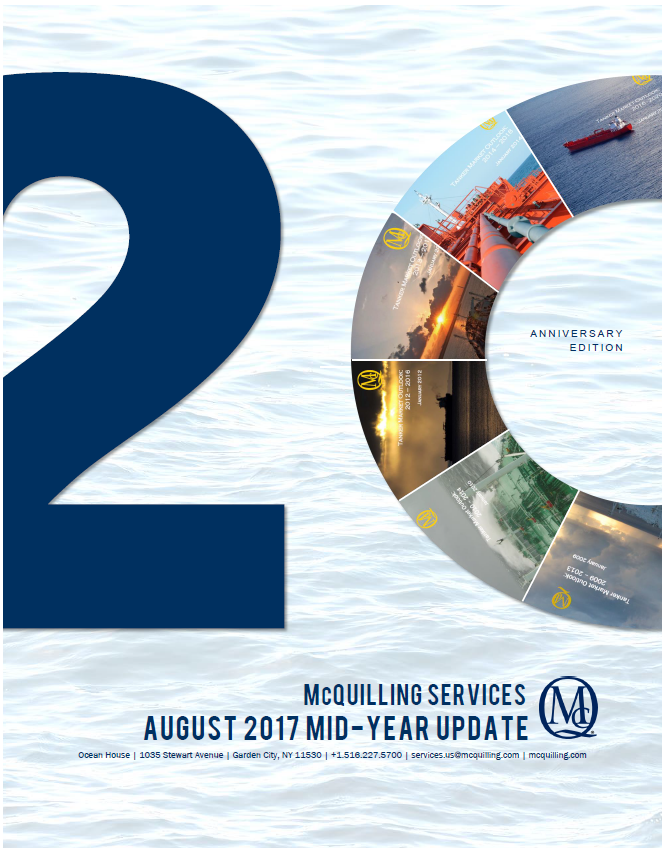 McQuilling Services is pleased to announce the release of the Mid-Year Tanker Market Outlook Update. The Mid-Year Tanker Market Outlook Update provides an outlook for monthly spot market freight rates and TCE revenues for 19 major tanker trades across eight vessel segments for the second half of 2017 and the remaining four years of the forecast period.

Global oil demand growth is expected at 1.3% in 2017 to over 96.9 million b/d with significant gains projected in the middle-light end of the barrel. Over the forecast period (2017-2021), we are likely to see global oil demand expand by 1.0% annually, climbing above 100 million b/d.

Global crude oil production is expected to rise by 55,000 b/d this year and remain around levels witnessed in 2015. With OPEC production cuts in full effect, Middle East crude supply is on track to fall by 580,000 b/d over 2017, compared to a rise in output of 1.7 million b/d over 2016. While global oil supply is expected to rise over the forecast period, structural supply declines are projected in some Caribbean countries, tempering the positive impact from US and Brazilian exports.

HSFO is projected to average US $285/mt in 2017 and US $272/mt in 2018 before increasing above the US $300/mt mark in the outer years. With the turn of the IMO 0.5% sulphur regulations, LSFO will likely price around US $200-300/mt higher than HSFO; however, as the interest in scrubber technology rises we are likely to see higher demand for HSFO and a potential narrowing of this differential.

Tanker demand for crude and residual fuel products is expected to increase by 2.9% in 2017 from year ago levels as oil demand remains resilient amid an oversupplied market. Clean tanker ton-miles are forecast to rise by 1.3% this year and accelerate to an annualized 1.5% over the forecast period as economic growth in emerging economies boosts global product demand.

An expansion of 2.5% in VLCC demand is anticipated for 2017; however, as we move into the outer years of our forecast demand growth is likely to decelerate on the back of slowing oil demand growth in OECD countries. Following only a 0.8% increase in 2016 ton-mile demand, Suezmaxes are poised to expand 5.8% this year as Black Sea supply from Kazakhstan and re-directed Russian flows support longhaul demand. Aframax demand is projected to rise by 3.3% in 2017, higher than our original call amid strengthening intra-Mediterranean volumes following Libya’s return to the market.

LR2 demand is projected to fall in 2017 by 3.1% due to average voyage mileage declines as product demand and supply mismatches become less pronounced. With a market share of 20%, LR1 tanker demand will record the highest annual growth of all the sectors we analyze with a projected 3.9% annualized growth through 2021. In 2017, the MR2 sector is expected to rise by 3.1% versus year-ago levels as US Gulf Coast and Southern European exports keep volumes steady, while traditional MR load region, Northern Europe, continues to display some downward pressure.

Newbuilding prices in 2018 are projected to increase slightly from 2017 levels. Contract values are less sensitive to the prevailing earnings environment despite our call for time charter rates to decline in 2018. Shrinking shipyard capacity amid restructuring, a weaker US Dollar may mitigate the expected weakness in earnings from oversupply in 2018. In 2017, we project VLCC contract values basis Korea/Japan to average US $81.1 million, while Suezmax orders are forecast to average US $54.0 million. On average, we are projecting a 2% - 4% increase in newbuilding values for 2018.

We forecast DPP tanker freight rates to remain weak over the forecast period, amid a chronic oversupply of tonnage underpinned by strong contracting. We have maintained our original call for WS 61 on TD3 for 2017; however, the balance of the years have been reduced downward. With ECO-consumptions, an owner may be able to produce TCEs above US $30,000/day along this trade, although more risk to the downside exists.

For the CPP sector, our outlook reflects a recovery in freight rates; however, earnings will remain influenced by global crude prices and potentially higher fuel costs. As such, MR rates along the TC2 route are projected to average at WS 143 this year and rise further to WS 152 before the end of the outlook period. On a triangulated basis, the TC14/TC2 voyage will return a non-ECO ship an average TCE of around US $11,637/day over the five-year forecast period.

McQuilling Services 2017 Mid-Year Tanker Market Outlook Update can be purchased online at www.mcquilling.com/reports.html or by calling 516-227-5700.