Rate Rally in the Gulf

Freight rates for clean tankers in the US Gulf-Caribbean are on the rise, underpinned by a conglomerate of supportive fundamentals.  TC3 was assessed at WS 195 today, a 26% rise from June’s open, while freight on the US Gulf > Carib route has risen by US $150,000 over the same period.  US Gulf refiners continue to run at high utilization with crude intake reaching 17.2 million b/d in the last week, boosting gasoline inventories to 242 million barrels.  Clean cargoes out of this region have been plentiful with total US product exports averaging at 5.1 million ...

Utilizing our remotely sensed vessel position data, we took a look into the aftermath of the Panama Canal Expansion project.  Our data shows that the monthly average of Panama Canal tanker transits reached 85 trips in the first five months of 2017, a 16.5% year-on-year increase from 2016.  The passage way concluded its expansion in June of 2016, which added a third set of locks and doubled the canal’s transit capacity.  Since the beginning of 2017, we have seen a notable rise in Aframax/LR2 sized transits following a lack of activity in the second half of 2016 ...

The following is an overview of tanker spot market activity for the week ending June 9, 2017

We counted about 20-22 vessels reported fixed or on subjects in the Arabian Gulf this week with freight rates relatively steady at WS 50 for AG/East depending on factors such as age, preferred destination and if the vessel was disadvantaged.  The TCE for a voyage on the AG/Japan route was pegged around US $16,000/day (WS 50), while AG/West paid in the mid to high WS 20s with less downward due to the fact that the follow up ...

Suezmax freight rates out of West Africa have come under recent pressure, plagued by poor fundamentals on both the demand and supply sides of the equation in what can be described as “the perfect storm.”  Despite reports of higher crude output in Nigeria and the recent lifting of force majeure on the Forcados crude stream, we have observed just five vessels reported fixed or on subjects by mid-week, representing softer tanker demand.  From a vessel supply perspective, the tonnage list in West Africa remains long, compounded by a weaker Arabian Gulf market sending ballasters into the region. 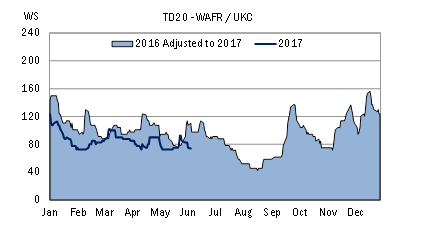