Clean East | The AG market is starting to pick up a bit on the LR1s as more activity is being seen. We are seeing the same sentiment for the LR2s.  No change in the Southeast region; however, MRs in the North look to be more active although the tonnage list is balanced.

At the start of 2015, the tanker trading fleet* totaled 3,645 vessels.  This represents an approximate 1% net fleet growth year-on-year.  We expect that throughout 2015, there will be a total of 161 additions and 43 deletions, a net fleet growth of 118.  The largest growth is anticipated to be seen in the MR2 sector, while the uncoated Panamax sector will experience negative net fleet growth.

So where does vessel supply stand at the end of the first quarter?

VLCC
Four newbuildings have delivered to the trading fleet, while two vessels were sold for demolition and and two for ... 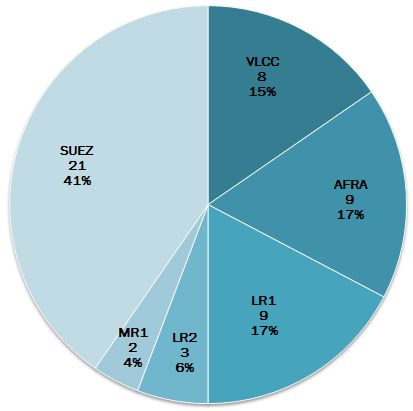 012.  Through March, our proprietary data showed that 52 orders have been placed, the bulk of which were Suezmax tankers.  Following this were the Aframax and LR1 tanker classes.

Owners have strayed away from ordering newbuilding MR2 and MR1 tankers.  In fact, no MR2 orders have been recorded to date and just two MR1s were ordered.  When compared to the first quarter of 2014, there were two MR2s ordered through March and nine MR1s.

Suezmaxes have had a strong start to the ...