Clean East |  The AG market has remained muted due to APPEC. The list in the South looks a bit longer and may start to soften; however, it is getting busier in the North as ships are slowly fixed. A few cargoes are seen coming out in middle of Oct.

Clean East |  Market starts the week on a quiet note amidst the commencment of the yearly APPEC. LR2s are holding stable but the LR1s and the MRs in the Arabian Gulf region are looking softer for this week. The southeast region still looks firm as some promptish cargoes were seen done at higher rates due to a very tight prompt list. The north was seen soft due to ample tonnage, however there were some activity seen in the first decade of October which held the north steady. The coming Muslim holidays, Chinese golden week, and Japanese holidays would probably keep ...

Clean East | The week has ended on a stable note East of the Suez - not much change on the LR2s.  LR1s are losing some more traction and the MRs are looking softer.  The market in the South is still holding firm with owners opening Australia preferring to ballast to Singapore instead of the weaker North market.

Clean East | The LR2s in the AG segment remain stable; however, LR1s and MRs are being seen as the weaker segments on the back of minimal activity.  The Southeast market continues to be firm, while the North i still coming off due to an ample amount of tonnage.  Some are saying the typhoon situation in the North could create some positivity for owners; however, there are eenoiugh ships to go around.

Clean East | LR2s are holding well on a tight tonnage list - hearing fixtures being done around WS 105-110 on TC1.  Sentiment on the LR1s is softening as the list gets longer.  MRs are still stable.

Clean East | The Arabian Gulf remained stable this week.  LR2s are holding firm and the LR1s are on the soft side.  MRs are still active. The South is still very firm with a tight list until early October.  The North is stable - LRs are being fixed but MRs are still quiet.

In what’s being described as the largest and deadliest outbreak in history to hit West Africa, the current Ebola epidemic has claimed the lives of roughly 2,400 people as of mid-September, according to estimates from the World Health Organization (WHO).  With the first known human case reported in Guinea, the virus has since spread to Liberia, Nigeria and Sierra Leone (Figure 1). 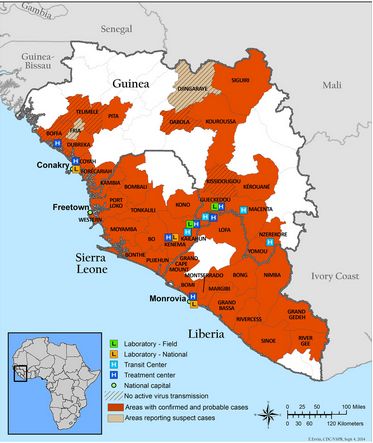 Source: Centers for Disease Control and Prevention (CDC)
*as of September 6, 2014

There are also a few known cases reported in Senegal; however, one of them, a 21-year old ...

The 2013-built Bulk Carrier Western Copenhagen has reportedly been barred from entering Malta's harbors, according to recent reports.  The vessel, while en-route from Guinea to Ukraine, had sought medical assistance from Maltese port authorities for one of its crew members that seemed to be suffering from Ebola-related symptoms.  Patrol boats were sent to ensure the vessel did not enter Maltese waters, according to BBC News.

The vessel has since traveled to Sicily, Italy where the Filipino crew member was offloaded and given antibiotics.  It's still unknown if the crew member is actually infected with Ebola.

Clean East | An LR2 is on subs at WS 105 for TC1 and under tremendous pressure to trade lower.  TC5 will face some resistance when trying to climb higher as most end-month stems are already covered.  The MR market for AG/Spore off promptish dates is rather tight, while the North market is definitely falling.

Clean East | LR2s are continuing on a downward trend due to a lack of activity.  Meanwhile. LR1s are holding firm against a tight tonnage list. With enough activity to keep the MRs busy - they've been experiencing a steady trend.  The Southeast region is very firm and some charterers are unable to find ships for their cargoes.  The North is getting weaker and it's becoming quiet there.

Regression analysis is a helpful tool which may be used to predict a continuous dependent variable (ex:  asset values) from one or more independent variables.  In our analysis, we use regression models as one component in our asset forecasting process in addition to an income based valuation and input from our sale and purchase desk.  When conducting regression analysis, the objective is to identify a strong correlation between a dependent and independent variable using historical data.  Using a scale of 0.0 – 1.0, a strong, positive correlation is typically defined as being above 0.7.  If the analysis indicates ...

Clean East | The clean petroleum tanker market seems to have simmered down as we start the week.  The activity for LR1s seems to be focused on end September dates.  Is this a sign of a pre-APPEC rush to cover positions? We will see.

LR2s remained stable with some weakness due to a lack of activity.  MRs in Singapore are well employed and we're not seeing the same spikes as we do on TC5.  The market in the North is also seeing positions get longer.  We will know in the coming days how the market evolved.

Clean East | The LR2s are holding well amid firm sentiment on the LR1s and MRs.  As of early this week, about 10-15 LR1 cargoes were seen in the market until the end of September.  Charterers are rushing to fix and owners are asking for WS 125 on TC5.  The Southeast region is still stable and the North looks softer at the moment as less activity is seen.

Clean East | Sentiment continues to be weak for LR2s; however, LR1s are hanging on to firmer sentiment and heard 55,000 x WS 120 for done AG/Japan.  MRs are also firm and there are quiet a number of ships on subs until the end of September.  Overall activity will probably help the LR2s hold ground.  The Southeast market is holding stable with ample activity. The North looks to be losing further ground with a longer tonnage list for MRs to LR2s.

Clean East | LR2s are holding stable although it seems they list may be getting longer later on in September.  LR1s are tight and sentiment is firming, which will probably steady the AG market.  MRs are still busy and the Africa voyages seem to be preferred over the TC12 run.  The Southeast market is still stable and the north looks a little soft on more available LR tonnage.

Clean East | The AG region is holding steady on the back of positive sentiment.  MRs are the busier segments and will likely help support the general AG market.  The Southeast region is also busy on the MRs with a flurry of activity seen ex-Thailand and ex-Singapore (quite a number of ships are on subjects).  The North is looking soft as there are more LRs seen in the region and they will compete with the MRs for backhaul cargoes.

New York/Rio de Janeiro – 8 September, 2014 – Following our announcement on 2 September, 2014 regarding cooperation with Syndarma, the McQuilling Partners Group is pleased to announce the signing of a cooperation agreement with Vale, S.A, one of the largest mining companies in the world with substantial involvement and expertise in global marine transportation logistics.

The cooperation will support the implementation of the largest ship repair facility in South America.  The project, called Brasil Basin Drydock Company (BBDC), has the objective to build a ship repair yard in the northeast of Brazil capable of drydocking any vessel in the ...

Clean East | LR2s continue to hold steady.  LR1s are still showing signs of weakness, but may receive a boost from the LR2s.  The MRs in the AG region look stable as well.  The Southeast market is unchanged and the North looks soft with quite a number of ships in the first half of September.  Some cargoes are being uncovered for the second half of September.

New York/Rio de Janeiro – 2 September, 2014 – The McQuilling Partners Group is pleased to announce the signing of a cooperation agreement with Syndarma, the Union of Brazilian Shipowners, in support the implementation of the largest ship repair facility in South America.

The project, called Brasil Basin Drydock Company (BBDC), has the objective to build a ship repair yard in the northeast of Brazil capable of drydocking any ...