Clean East | The LR2s are still showing signs of weakness due to slow activity and hearing 75,000 x WS 107.5 was done AG/Japan.  On the LR1s, hearing a Red Sea/Japan fixture is on subs at 55,000 x WS 115.  MRs in the region are holding stable.  The Southeast is holding stable, but rates may start to soften.  The North is still tight and owners are trying to achieve higher rates.

Clean East |  It looks like the AG segment is finding some ground as rates hold steady on the LRs.  Owners' sentiment is positive and positions are beginning to look shorter.  The MRs in the Southeast and Far East are looking steady.

Clean East |  The week has begun on a quiet note in the AG although there's still some activity in the region on the LRs and the owners are optimistic that the market has found a bottom.  The MRs are holding steady in the AG, as well as the Southeast segment.  The North is still active ahead of the winter season and we should see more activity until the end of December.

Clean East | LRs in the AG continue to be slow and rates should come down lower due to the lack of activity.  The MRs are still holding well with healthy activity seen, especially in the Southeast region.  Charterers are having a hard time finding ships for prompt loadings.  The North is still busy and fixing for the first decade of December to mid-December.

Clean East | Although there's activity in the AG, rates continue to be soft.  Charterers are looking to fix below the last done on LRs.  The MRs in the region are also coming off the highs of last week.  The list is getting longer into December in the Southeast segment, while the North is seeing cargo requirements in the first decade of December where the list is tight.

Clean East | The East of Suez market is off to a slow start without much noise of fresh inquiries or replacement requirements today.  TC5 is being heard at WS 125 for a replacement of 55,000 tons of naphtha out of New Mangalore off end Nov.  This is a strong reflection of the weakness in this segment when just last week owners were talking WS 130.  TC1 has WS 112.5 on subs for Chrysanthemum loading 75,000 tons out of AG off early December.  We will see how the rest of the week goes.

Clean East | The AG market continues to show signs of weakness on the LRs.  Hearing 75,000 x WS 115 was done on an LR2 and sentiment is looking weak in the short term.  On the flipside, MRs in the region are gaining momentum and sentiment is firm  - this spilled over from the Southeast region as the list tightened.  Hearing US $185,000 done for a cross-Spore harbor voyage.  The North continues to be firm and the list is also getting tight here.

Clean East | The AG market continues to be quiet.  Heard a replacement job was done and the ship was fixed for prompt loading at 55,000 x WS 140.  The Southeast side is still stable and the North continues to be activie and quite a number of vessels are on subs until the ned of November.

Clean East | The new week commenced on a quiet note in the AG.  LR2s are still looking soft as little activity is being seen in that segment.  The LR1s and MRs are looking stable, while the Southeast market looks quiet as well.  Same can be said for the North.

We are pleased to announce that on November 15, 2014 in Shanghai, China, Mr. Nhaji Karma was re-elected Vice Chairman of the China Import Crude Oil Tanker Freight Index (CTFI) Panel.  During the event, Mr. Kharma presented to the panel the "The Influence of International Oil Price Fluctuation on the Tanker Transportation Market."

Pictures from this event can be viewed in our photo gallery

The first 10 months of 2014 has seen the majority of tankers increase in value on the back of higher earnings.  Notable appreciation for newbuilding values has been witnessed in Suezmaxes and LR2 tankers which have risen by 13% and 16% respectively.  However, LR1 tankers have seen the biggest increase since the beginning of the year, rising 27%.  The lone tanker which has seen newbuilding values decline is the MR2 which has fallen by 4%. 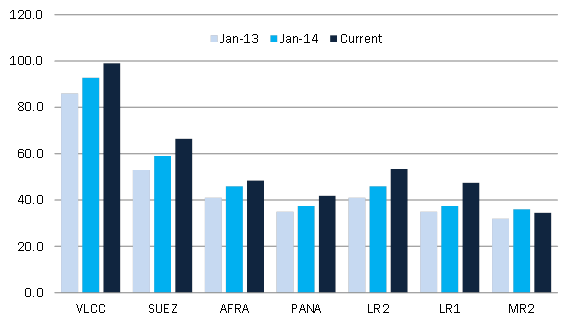 The analysis appears to indicate a unique disconnect between MR2 tankers and the rest of the vessels analyzed.  In anticipation of increased tanker demand, a ...

Clean East | The east of Suez continues ride on firm sentiment especially on the LR1s. The LR2s are looking to soften a little in the near term as more cargoes are being done on the LR1s and the MRs. The Southeast is slowly firming up on bullish AG sentiment. The North looks more active as there are more cargoes seen coming out in the middle of November, tonnage looks balanced for now, but may get tight in days to come.

Clean East |  The East of Suez market is still firm, especially for the LRs, due to North Asia's current strong appetite for naphtha.  The MRs are also enjoying firm sentiment as the high demand for short voyages in the AG as well as imports into Africa are keeping rates firm.  The South is also firming due to the sentiment in the AG.  The North remains stable.

Clean East | The week has commenced with bullish sentiment on the LRs, even with the Japanese on holiday.  Owners are still expecting the market to climb.  MRs still lagging behind with only a few fixtures reported at the same flat levels from the previous week.