Clean East | The week has ended on a bullish note, but there are still uncovered cargoes, mostly for LR sized ships.  It will be interesting to see what new limits owners can achieve.  MRs are fairly stable on most sectors.

Clean East |  Sentiment in the AG market is still firm.  Quite a number of MR stems have been seen heading to Africa.  The LRs are still holding steady as well. Singapore is stable and the North is getting tighter for the first half of November.

Clean East | The AG market seems to be stable and LR1s are on the quiet side.  The MRs are making a good run and heard high US $300,000 level was done for a cross-AG voyage.  The Southeast is tightening as some MRs have decided to ballast to the AG to look for employement - an expected move by some owners as this looks to be a better paying sector.  The North is stable and positions are balanced for today.

It’s no secret the oil tanker market has been struggling with an oversupply issue over the past few years.  The unbalanced supply/demand situation has led to an ongoing weak earnings environment for most owners and the industry has even seen some of the world’s most prominent tanker companies file for Chapter 11 Bankruptcy.   Amid the chaos, market participants like John Fredriksen of Frontline, took to the media in 2013 to urge fellow owners to scrap vessels older than 15-years of age.

Since this call to action more than a year ago, what adjustments have been made to ...

Clean East | The AG market commenced on a firm note, especially for the LRs.  Heard there are more LR cargoes coming out in November and rates are expected to trade even higher.  The Southeast Asia region looks to be stable with prompt activity.  There's some activity in the North and the supply/demand situation is balanced.

Clean East | The AG market is holding firm and the list for LR2s is tight.  MRs are starting to pick up; however, the South is still relatively stable albeit on the softer side.  The North looks quiet, but charterers are fixing quietly as we can see ships coming off the list.

Clean East | The AG market continues to be firm and positions for all sizes are tight.  Hearing TC5 on subs at WS 130 for a promptish laycan.  Also hearing TC1 done at WS 115.  LR owners are very bullish at the moment.  The Southeast market is also tight and the North is looking stable.

Clean East | The AG market continues to be firm, but rates are remaining steady.  No change in the Singapore market and the North is still balanced.

Clean East | The AG market held firm over the weekend and higher rates for the LRs have not yet been seen.  The Southeast is holding stable with promptish fixing; however, the list is a bit long.  The North is stable, but seeing more ships becoming available for end-October dates. 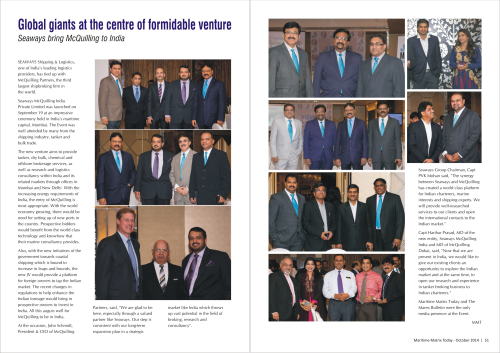 Clean East | The AG market ends the week on a strong note with firm numbers seen on the LRs.  Heard an LR2 was fixed at 75,000 x WS 111 for AG/Japan.  There are quite a number of MRs on subjects for short hauls.  The Southeast is starting to get tight on promptish dates, but there are still ships available for later dates.  The North seems quiet, but at the same time, stable and balanced.

The Art of Valuation: In the Mood for Crude

In the first part of our two part series on asset forecasting, Regression Discretion, we discussed how regression analysis may be helpful in predicting tanker values.

In our most recent industry note, we present another valuation methodology commonly referred to as discounted cash flow (DCF).  This methodology uses a discount rate (cost of capital) to determine the present value of future cash flows.  The future cash flows are calculated on an unlevered basis using EBITDA due to its capital structure neutrality.

Our methodology assumes a hold-to-maturity approach (sold for recycling) which increases our final cash flow by the historical, long-term ...

Our proprietary data shows that tanker newbuilding orders through the third quarter of 2014 are down 32% when compared to the same period last year.  We can attribute this slowdown to the lack of orders placed in the LR2 and MR2 segments.  As displayed in the figure below, roughly 137 orders were placed for MR2 (IMO III) tankers and 42 LR2 product tankers through September 2013.   The continuation of the weak earnings environment for clean tankers this year has likely dampened the enthusiasm exhibited in 2013 when LR2 and MR2 tankers dominated newbuilding orders.

It’s interesting to note the ...

Clean East | The AG market is firming up on a tight tonnage list - especially on the LR2s.  The Singapore market is stable, but more ships continue to be added to the list.  In the North, the MRs are also stable, but LR1s are tight.

Clean East | No change in the AG region today; Southeast market is softer due to a longer position list.  The North looks balanced, although there has been a slight rush for replacements due to the Typhoon Vongfong.  End October looks quiet.

Details surrounding Europe's response to the current Ebola epidemic were discussed in a recent article by Maritime Reporter.  Countries such as Spain, the Netherlands, France and the United Kingdom have all ramped up their precautionary measures for all ships scheduled to enter their ports. "All vessels must now submit their Health Maritime Declaration prior to arrival," is one of the examples cited for three of the four countries listed above.   Further information can be read on marinelink.com

Clean East | A slow start of the week softened Friday's bullish sentiments a little, for both LRs and MRs in the AG / WCI and South market. The North market has some delays caused by the Typhoon Vongfong.

Clean East | The week is ending on a firm note with LR1s leading the way. High fixture prices of LR1s are reported on all segments, TC5 55,000 x WS117.5, East Africa 60,000 x WS132.5 and US $2 million to the UK Continent. MRs following closely with the ex-AGs being more active.  A lack of cargoes for LR2s have put the larger tankers in catch-up mode.  Far East shows firmness as several cargoes are being quoted.

Clean East | The East of Suez CPP market has more activities, particularly LR1s out of AG-WCI.

Clean East | The AG market is a little bit more active on the LR1s after the holidays and owners are showing positive sentiments. The Southeast market is still weak due to a longer position list. The North market remains stable with cargoes partially offset ample tonnage available after the middle of October.

Clean East | The AG Market starts on a quiet note as Saudi Arabia is still on holiday. The Southeast market is getting softer as the list is getting longer. The North market remains stable at the moment.

Clean East | The East of Suez ends on a quiet note and the AG side is muted due to Muslim holidays. Southeast market is also coming off due to APPEC. The North is unchanged on the back of limited inquiry because of Chinese holidays.

Clean East | The market is still quiet and will be quieter for the week in the AG region with few fixtures done due to APPEC and Muslim holidays. It's the same in the Southeast market as well. Although there's some life in the North, rates have not moved higher.

Clean East | Market activity is generally slower in both the AG and WCI with APPEC in town. The South should start to soften because of the long list.  The North seems more active with cargoes entering the market and ships being fixed away.