Rates in the Med Rise

A firming trend has been observed in the Mediterranean market in November as Aframax rates on the cross-Med route have climbed from an average of WS 70.5 in October to average WS 98 month-to-date.  The strengthening is due in part to boosts in both Kazakhstan and Libya crude production, which has effectively increased available cargoes in the Central and West Mediterranean.  Although Kazakhstan’s output dropped by 300,000 b/d in August due to a period of heavy maintenance, the restart of the massive Kashagan field in the Caspian Sea increased the nation’s production to 1.25 million b/d in October.  As militant conflicts in Libya have eased, the OPEC member has managed to produce 538,000 b/d in October from 360,000 b/d in September and their Aframax loading schedule for November is already three times larger than in October.  Regarding, Kazakhstan crude, November loadings out of Ceyhan have increased by nine Aframax cargoes month-on-month.  The combined effect of increased cargoes, a tighter tonnage list and transit delays along the Turkish Straits, has pushed TD19 rates from WS 62.5 in the beginning of the month to trade at WS 172.5 on November 17 (Figure 1).   As a result of the climb in spot rates, the TCE on this route has increased from US $870/day to US $48,703/day over the same period. 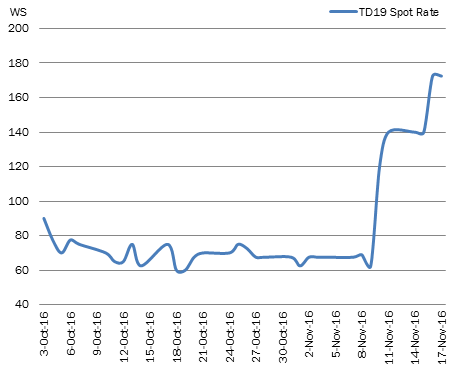